My name is Eleeshea Hagen, along with just about every other little kid in the world I grew up loving dogs. As a child I wasn’t very discriminate about what kind of dog I loved either and being out on a ranch with very tolerant parents I had quite a variety in my early years. Everything from Chihuahuas and Poodles to Mastiffs and Dobermans. All this childlike indecision was actually a blessing in disguise. Through it, I became familiar with the behavior of many breeds. By owning a poodle and then a chihuahua in close 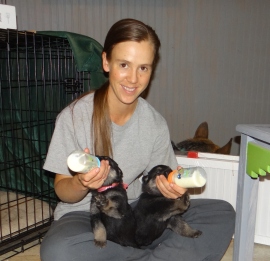 proximity I realized that not only were their bodies and appearances different but their innermost hearts were as well. I actually began raising poodles before Shepherds. I loved their smart perky little attitudes and quirky temperaments.  My female poodle Zippy didn’t like to be seen if her hair wasn’t done! After she had a trim she would strut around like a prima donna but when a few weeks passed and her hair started growing out she became a recluse spending her days in my closet in my clothes hamper; hoping, I suppose, to be thrown in the washing machine with them.

And then there was the Mastiff that helped my nephew learn to walk by laying near a fence and letting him hold on to the fence and walk up and down her. Nor must we forget the Doberman who took pleasure in only two things in life, balls and tug of war!  When I got my first German Shepherd, there was no going back, smart like the poodle without the vanity, loyal as Mastiff without the drool and driven like the Doberman without shallowness.

I had found my soulmate. 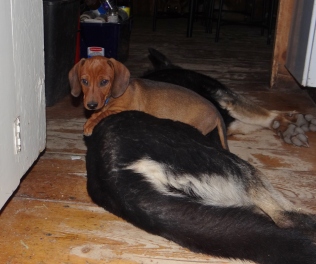 I have not owned another breed of dog since and through strategic campaigning my whole family has followed suit, except for the two Dachshunds of my sister in law, she protests that they are German made also. She mentions this fact as if it is supposed to somehow make them acceptable?

Over the years my love and respect for the breed has only grown. Every day my dogs remind me of their own uniqueness and every litter the miracle of genetics.  Being a breeder has never taken preeminence over being a pet owner it has instead enhanced the experience. Over the years I have seen my dogs and their offspring through every age of life.

I can look at the pups I have now and say “He got that from his grandmother!” “Look at him chase that ball, just like his father.” And as I train the great grand children I can see their thought process is that of another relative.

Of course this adventure has been a learning experience for me as well. I look back at some of the mistakes I have made and shake my head in amazement. Though there is much yet for me to  learn, I can look back at the training techniques I used with a certain dog and when I see one of its relatives with similar thinking I can more accurately know how I should teach

it. This phenomena happens so rarely in life it is quite thrilling when it does. Like a proud mother moment combined with a second chance. I am a also a horse trainer and riding instructor and enjoy working with humans and horses just as much, however with them there is less continuity. You must learn from each how to teach them on the spot. Children can be as different from their parents as day and night and as I didn’t know their grandparents and great grandparents I must make decisions from only the information gleaned in the moment. Don’t get me wrong there is nothing more exhilarating that teaching  someone to become one with a horse or a horse to be one with man, the dogs are just different.

When I began raising puppies I was doing just that; mom dog + dad dog = puppies. That is about all I knew about it. Years will either teach us something or make us fools. I now know about the evils of hip dysplasia and panosteitis and the prestige of Sieger, Shutzhund and IPO titles. But at heart I remain a country girl raising no-nonsense Shepherds who love with intensity and work with pleasure, who think a trip to the post office is a mission into enemy territory and a 10 mile hike a good warm up.

Perhaps what we love most about dogs (unlike cats) is that dogs make movie stars of us all. They are our fan club loving us unconditionally and gratefully soaking up the tiniest scraps of attention. And when we make mistakes they are our paparazzi turning even our blunders into something newsworthy. They motivate us to get out and move; they know how to make us laugh; when we cry they are always on our side. They will keep our secrets better than double 0 seven and their eyes we look better than Marilyn Monroe or Brad Pitt.

If genetics were easy to work with the world would be overrun with Man-O-Wars, Garfields and Lassies, however through careful selection we can improve the temperaments and trainablility of our dogs while reducing and hopefully one day eradication genetic diseases

In the end, our dogs are the reflection of who we are as individuals. More telling than the make of car we drive or the shoes we wear, they reflect our habits and characters as clearly as a mirror.  As a breeder it is my responsibility to give you a healthy well primed canvas on which to paint a masterpiece. It is with this goal in mind that I make every decision about my breeding program.

Click here to view our current Sires and Dams

Book: The Art of Raising a Puppy

Book: How to be Your Dog’s Best Friend